Observations using the sensors sold by our company were carried out during the research cruise in the western tropical Pacific Ocean by the R/V MIRAI of JAMSTEC (the Japan Agency for Marine-Earth Science and Technology).

This voyage was conducted for 43 days from May 26th to July 7th, 2021 to investigate climate change phenomena originating from the sea.
During this cruise, we carried out several times of single JES10mini cast, cross section survey using several JES10minis at once, observation using a wave glider equipped with JES10mini and drift observations of the small observation float MOF.
We captured the current state of the sea in detail using various methods.

Observatories on this cruise. 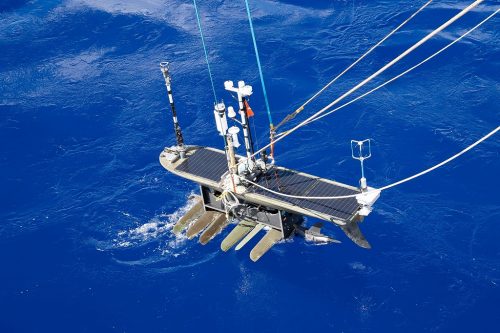 The wave glider equipped with JES10mini, compact CTD sensor which is sold by Offshore Technologies. 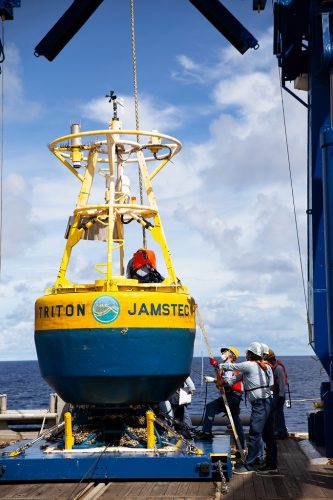 A large mooring buoy, the Triton buoy, recovered during this voyage.
The previous model of the JES10mini was developed as a CTD sensor to be installed on the Triton buoy.
It had been moored in the observation area of 5,000 m depth for long term, and observed the CTD, current etc. in the sea and the wind direction, temperature, humidity, etc. above the sea. It can collect high accuracy and continuous data but the maintenance cost is very high. Therefore we are trying various observation methods other than mooring buoy.