We capture rapid environmental changes through the power of technology

We want to create new technologies for this purpose.

The oceans cover 70% of the earth’s surface.
Small changes in the oceans are related to global climate change and have a tremendous impact on our lives.
Coastal fisheries are greatly affected by changes in the local ocean. By understanding the environment, we will be able to operate more efficiently and effectively.

By capturing the changing natural environment with the power of technology, we hope to contribute to solving social issues such as environmental problems, food shortages, aging society and labor shortages, and create new services to improve people’s lives.
To achieve this goal, we are developing lighter and user-friendly observation equipment and proposing observation methods that meet the needs of users so people can observe the ocean without special equipment or specialized knowledge and expertise. 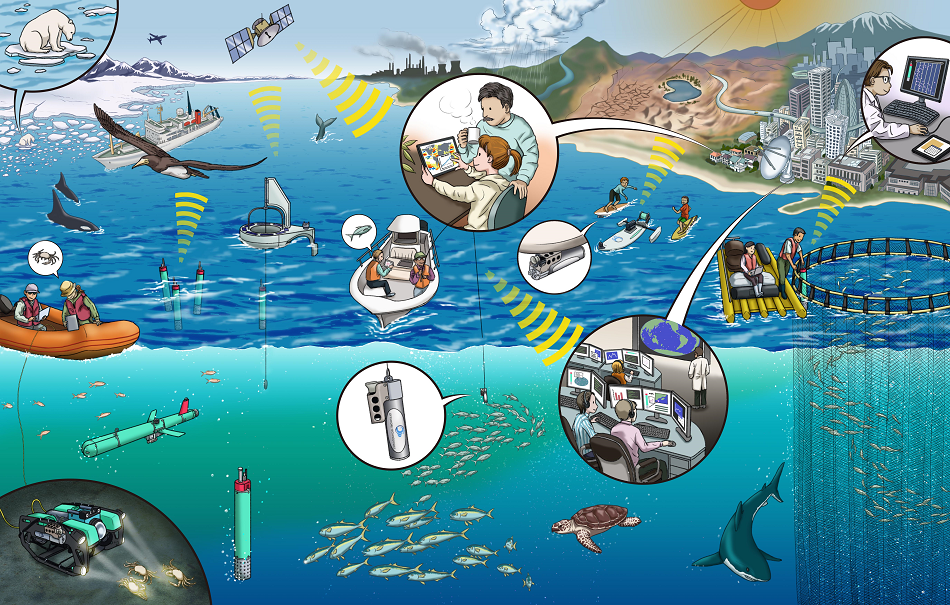 We will promote the use of compact, lightweight, and easy-to-use observation equipment, as well as automated observation.
Through these efforts, we aim to create a society in which people feel more familiar with the ocean and the earth,
are concerned about environmental changes, and create a better future.

Thoughts on the founding of OFFSHORE TECHNOLOGIES

OFFSHORE TECHNOLOGIES was founded by members of the Japan Agency for Marine-Earth Science and Technology (JAMSTEC), a national agency in charge of developing ocean observation instruments.
We would like to promote the automatic observation of the oceans by utilizing the technical assets developed at JAMSTEC, such as small multipurpose observation floats, underwater gliders, and their onboard devices, to develop equipment that is more versatile, easy to use, and can be introduced and operated at the lowest possible cost.
Our goal is to have these devices used not only for academic observations, but also in a wide range of fields such as fishery, agriculture, and manufacturing industries
We are also committed to fostering the next generation of human resources, who will be responsible for the development of ocean observation technologies, and we hope to promote the ideal society for our future.

History of our founding

We have developed the following ocean observation instruments at JAMSTEC.
Based on these technologies, OFFSHORE TECHNOLOGIES was established under the JAMSTEC Startup Program. 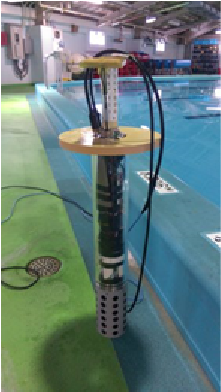 A prototype of the observation float we developed.
This prototype would later become the “MOF” we are currently selling.

JAMSTEC has been conducting observations in the Arctic Ocean for research on climate change.
In response to the needs of researchers, we decided to develop an instrument to observe under the Arctic sea ice. However, this required severe development conditions, mainly limited development time and manpower, as well as coping with the specifications required in cryogenic environments of the Arctic Ocean.
By applying the observation float system we had developed so far, we managed to complete “MOV,” an under-ice observation system for the Arctic Ocean.
We developed highly reliable underwater thrusters to enable continuous operation for more than a week under the Arctic ice, with a system to propel the vehicle with as little energy as possible while achieving stable operation even at low temperatures.
In 2016, we succeeded in capturing images under the sea ice during the Arctic voyage of JAMSTEC’s Oceanographic Research Vessel “MIRAI.” 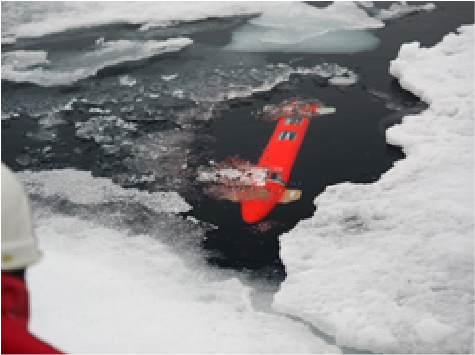 A highly reliable underwater thruster was needed to enable continuous operation for more than a week under the Arctic ice.
This photo shows a thruster durability test in an environment that simulates seawater under sea ice at -2°C.

Development of a new underwater glider 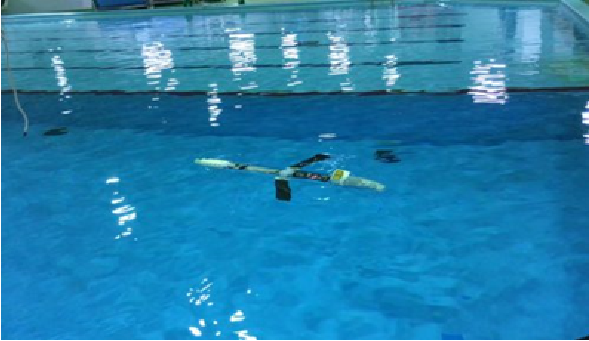 Product-testing in a pool at JAMSTEC. This is prototype of “MOG (Multipurpose Observation Glider)  “.

April 2, 2018 The establishment of OFFSHORE TECHNOLOGIES

We commercialized these instruments, which were fundamentally developed at JAMSTEC, and began selling the compact CTD sensor ”JES10mini”, and the multipurpose observation float “MOF”, in 2020. Improvement of these and development of new products are underway.